Why do people pig out on Thanksgiving and then go crazy on Black Friday?

With the holidays upon us, we’re taking a break from deconstructing what makes things funny and instead pondering the tradition that is Thanksgiving. We’re not talking about gathering with friends and family to express gratitude for what we have been provided. We’re referring to the national customs of eating to the point of pain on Turkey Day, then turning shopping into a blood sport on Black Friday.

Neither makes much sense on the surface. While it’s one thing to overeat on special occasions, it’s quite another to gorge oneself, as many of us do on Thanksgiving. The average American consumes 3,000 calories and 229 grams of fat at the Thanksgiving table. To put that in perspective, a fit individual would have to run for four hours to burn off those extra calories.

What exactly is going on here? Is all that tryptophan going to our heads, turning us into gluttonous, blood-thirsty zombies?

The explanation is likely more simple. One of the hallmarks of psychological science is that we are influenced by the actions of others — often more so than we’d like to admit. Sometimes we’re impelled to take positive actions, such as switching to reusable bags or cutting down on littering. Other times, social influence can be quite negative. When it comes to Thanksgiving and Black Friday, unfortunately, the influences skew more toward bad than good. 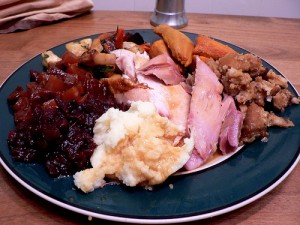 When those around us succumb to indulgences, we’re more likely to succumb as well. It’s why obesity was recently found to spread from one friend to another, like a disease. The phenomenon is so formidable that a person packing on pounds in one city can influence a friend’s waistline hundreds of miles away. Likewise, the person across from you at the Thanksgiving table can unduly influence your decision to put in for a third serving of stuffing.

But that’s not all. The chitchat around the table is also a culprit. While conversation and storytelling can result in a wonderful experience, they impair self-control.

Research has shown that others tend to distract us from paying attention to what we are eating. Brian Wansink, author of Mindless Eating, found that distractions lead people to ignore the most important eating cue-hunger. In our favorite study, for instance, people eating soup from bottomless bowls failed to realize they never finished, no matter how much they ate. As a result, they consumed 73 percent more than those who ate soup from a normal bowl.

Social triggers may also play a role in the mob mentality that pervades Black Friday. That includes the concept of scarcity-the frenzy-inducing promise of “while supplies last.” It turns Black Friday shopping into a physical and mental achievement, one that requires us to outwait, outwit, and outrun our fellow shoppers in order to “win” (i.e., buy something).

As Texas A&M marketing professor Suresh Ramanathan notes, “I have always thought of it as a competitive sport-the scarcity primes a competitive motivation so that people will go to absurd lengths to get the best deal or snap up something before others can get to it.” Consider how the hot toy each holiday season becomes hotter and hotter as stores begin to run out.

Even worse, the Black Friday routine most retailers have adopted-locking entrances until the exact minute of opening time, inadequate staffing, no crowd management-means consumers are primed to act in the worst ways, recklessly charging into stores as soon as they are allowed.

Once one person begins running, everyone follows course. It’s the concept of social proof (“If somebody else is in a hurry, there must be some urgency, so I should hurry, too”). And once everyone is running toward the same destination, the situation turns bad quickly. Contrary to media interpretations, research has found that most crowd disasters aren’t “panics,” such as when everyone tries to flee a building. Instead, the majority of crowd calamities are associated with “crazes,” the phenomenon of everyone rushing toward the same thing they all want.

Does this mean we are helpless to the whims of the crowd on Thanksgiving and Black Friday? Not necessarily, since we can always exert self-control. On Thanksgiving, think smaller plates of food, as advocated by Wansink’s small plate movement: You’ll clean your plate faster and then stop and think about how hungry you are before going for seconds or thirds. If you’re just digging into one gigantic mound of chow, you may never take a break to check in with your body’s hunger queues.

As for Black Friday, shop online. After all, more online retailers are now matching or beating the best Black Friday deals of the big-box stores. And even if some in-store prices are better than those on the web, ask yourself this: How much is your time worth? Are cold, early-morning hours spent waiting in line with potentially violent shopaholics really worth saving $50 on that flat-screen TV?

Sure, lots of other folks seem to think so. But just because other people believe something doesn’t make it true.