Who is the NBA’s funniest player?

As part of our Humor Code project, Joel Warner and I asked a couple of NBA knowledgeable comedians the question: 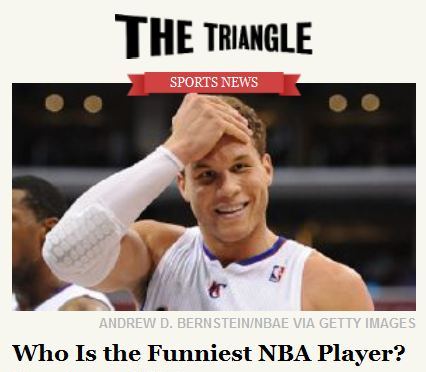 The answers were provided by Neal Brennan, the co-creator of Chapelle’s Show, and Alonzo Bodden, winner of Last Comic Standing. See the exchange in this Grantland column.

A glimpse at the exchange:

Joel Warner: First question: Who’s on your all-time funniest-player short list, and why?

Alonzo Bodden: Charles Barkley, for his openness while playing and his analysis in retirement. From his “I Am Not a Role Model” campaign to him saying a team sucks when we know it sucks but no one else will say it.

Kenny Smith for being the only person who can shut Charles up.

Blake Griffin for his Kia commercials.

And I have to add LeBron James to my list for his ESPN commercials and his appearance in Miami’s “Harlem Shake” .

Neal Brennan: Charles Barkley for tossing a guy through a window and hosting SNL twice. (“Barkley vs. Barney” was a stand-out sketch from his first appearance.)

John Salley was funny on The Best Damn Sports Show Period and was man enough to actually do a bit of stand-up.

Rick Fox for his hair.

Blake Griffin for his Kia commercials, his Twitter feed, and his interviews.

Peter McGraw: I am surprised that Jalen Rose was omitted. He has great stories, including the time he stole Patrick Ewing’s TV.

4. Jalen Rose (Guard, Retired). As I mention above, his story about stealing Patrick Ewing’s TV, and other stories.

3. Shaquille O’Neill (Center, Retired) Besides his dedication to studying humor, he is highly quotable:

I’m tired of hearing about money, money, money. I just want to play the game, drink Pepsi, and wear Reebok.

2. Charles Barkley (Forward, Retired). His quotes are better than Shaq’s:

1. Blake Griffin (Forward, Los Angeles Clippers). I am siding with Neal on this one. Great Twitter feed and commercials:

Rick Barry (Forward, Retired): Seems to be a jerk, but those his free throws are funny (yet effective).