What started as a small celebration of single living at a Chinese university has turned into a global demonstration of the buying power of singles.

Partnered people have Valentine’s Day and New Year’s Eve, and families have pretty much every other holiday.

Is your business ready?

Singles’ Day started in 1993 as an unofficial celebration of single living by students at Nanjing University in China. The date, 11/11—fittingly filled with 1’s—symbolizes solo living. Hence the nickname “Double Eleven.”

Solos approach the holiday in different ways. For some, it’s a day focused on finding love (e.g., making oneself more appealing to a potential partner). For others, it’s a celebration of singlehood. Activities include treating oneself to dinner or a movie, joining friends for “dates,” or simply splurging on a long-awaited gift. Or the day is about self-care, looking after one’s well-being, or simply enjoying some pampering.

As revealed in my previous article, singles make up an increasingly large, diverse group of American adults (128 million, in fact).

The rise of solos is prominent in Asia, too.

China’s One-Child policy has exacerbated the number of singles in the country; there are an “extra” 30 million Chinese men with many desperate to find a wife. Not coincidentally, Singles’ Day was originally called “Bare Sticks Day.” (A bare sticks is a pejorative nickname for a bachelor.)

Being solo in Asia is also increasingly a personal choice, especially among women in Japan and South Korea. As an example, a future article will introduce you to the Honjoks, a sizable group of young, creative solos rebelling against South Korean norms of family and economic achievement.

While the average organization is focused on the family, Alibaba created the most profitable day of e-commerce by targeting solos on November 11th.  Besides the sheer size of the single population in Asia, growth has facilitated discretionary spending. Expect a $10 trillion consumption growth opportunity over the next decade according to a recent McKinsey report. 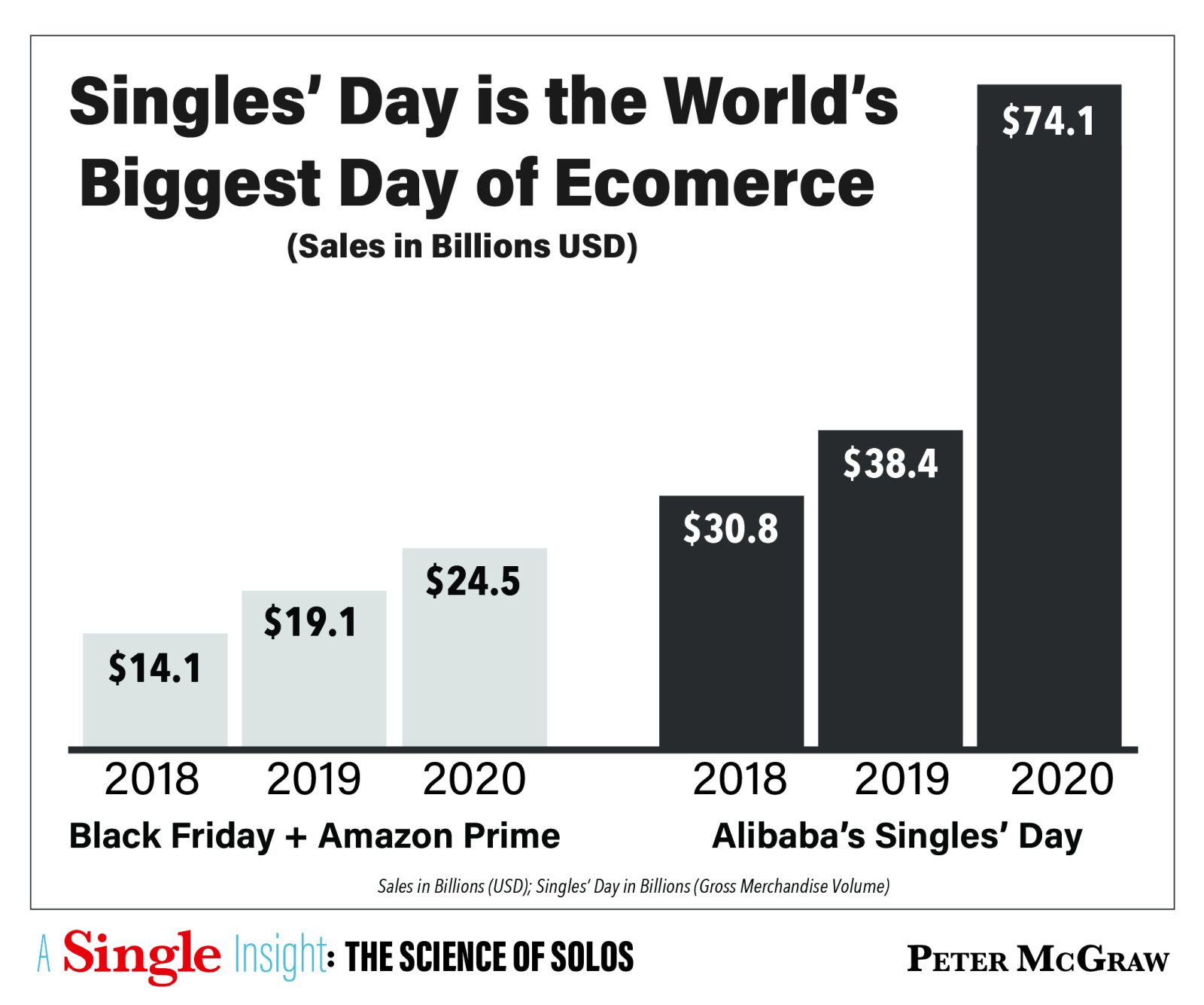 Alibaba is not without competitors. Therefore, promotions start weeks in advance, including four hours of online entertainment featuring Chinese celebrities and other international stars. Alibaba, targets consumers and content creators alike to “plant grass” (i.e., Zhongcao), which is akin to “keeping up with the Joneses.” Zhongcao essentially refers to people’s desire to own the same possessions of their friends (and even celebrities).

Singles’ Day is catching on in other countries: celebrated throughout Southeast Asia and some European countries, including Germany, Sweden, Norway, and Belgium. (Germany’s version was not well-received given 11/11 is also the Armistice that ended World War I.)

The US and Asia have distinct cultural and consumer differences, so American businesses tapping Singles’ Day as a viable tactic requires the right promotion.

To give you a glimpse into how US singles are thinking, I ran a survey that asked nearly 400 singles in the United States about how they would like to spend the day (age 24-59; 1/3rd were aware of the holiday). I asked them their preference for activities that fit three categories: find someone to date (e.g., get on a dating app), celebrate (e.g., treat yourself to a gift), and self-care (e.g., spend time on a hobby you enjoy).

Self-care was by far the most appealing category, most preferred by 58% of solo respondents. However, there was a different pattern when you consider relationship goals.

My research reveals that there are two broad categories of singles: 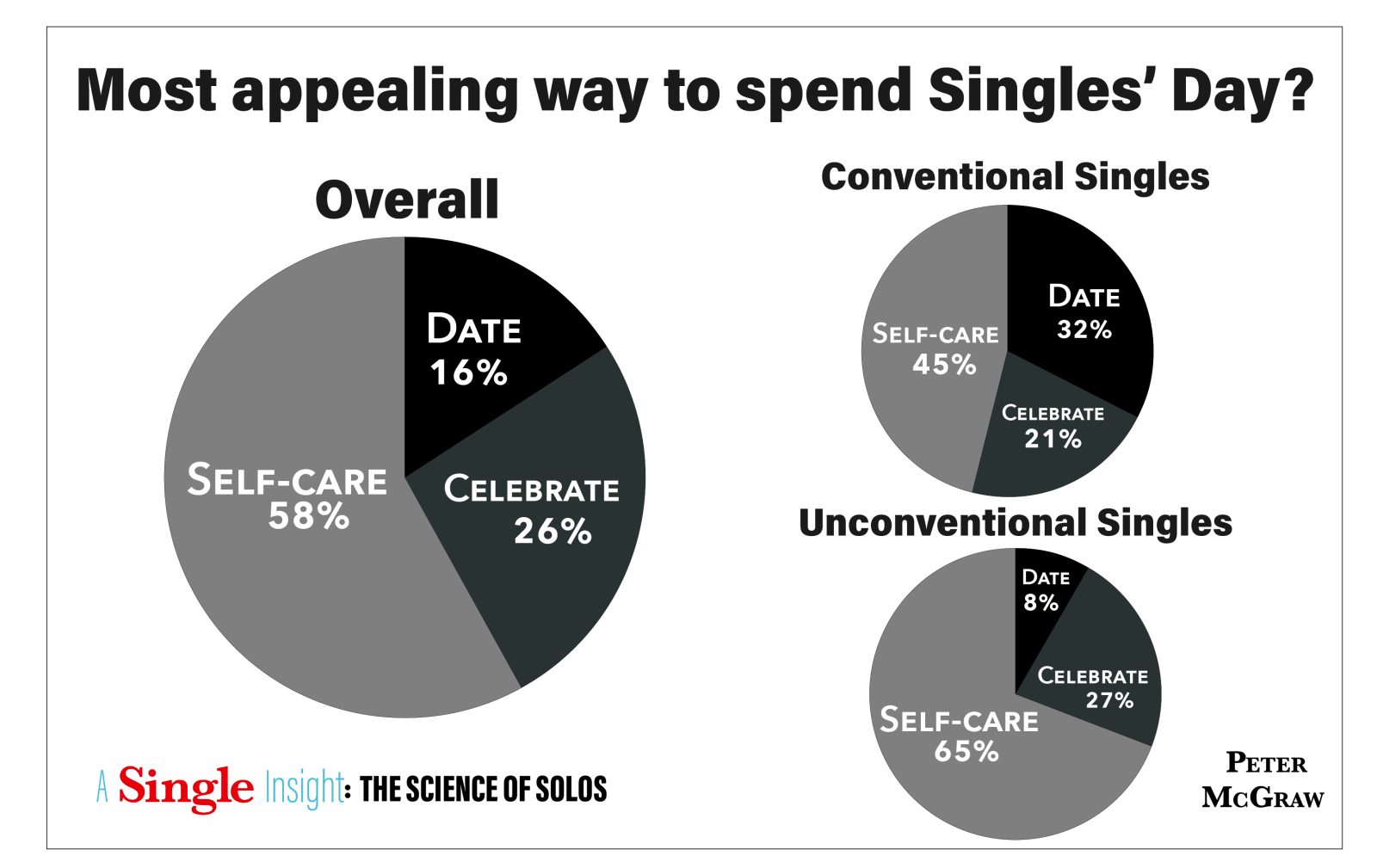 With these results in mind, I spoke to Kym Terrible, an entrepreneur and founder of the Colorado-based candle company Wax Crescent. She built her company to support self-care and intentional living (so this insight was a natural fit). She is hosting a week-long promotion that kicks off on Singles’ Day. Customers (single or not) get a sitewide 20% discount with the promo code: SOLOSELFCARE

It may be too late for you to take advantage of these insights, but I will plant a seed: How are you planning for Single’s Day next year?

Dr. Peter McGraw—a behavioral economist, business school professor, and bachelor—hosts the podcast Solo—The Single Person’s Guide to a Remarkable Life. His solo clubs on Clubhouse are home to more than 200,000+ members. As the Director of The Humor Research Lab (HuRL) and two-time author (The Humor Code and Shtick to Business), McGraw speaks at Fortune 500 companies, public events, and universities around the world.