Off to Scandinavia, to explore the dark side of humor

With winter weather in full force, it’s a great time of year to get away to an exotic locale, and that’s exactly what we’re up to here at the Humor Code. So where are we destined? Some sun-dappled countryside? Or maybe a tropical oasis complete with white-sand beaches and swaying palm trees?

Far from it. We’re off to a land of nearly complete darkness, just a frozen stone’s throw from the Arctic Circle, a place of trolls and nihilism and bisexual lady hackers.

In other words, we’re heading to Scandinavia.

We’re doing so to explore the less-than-rosy side of humor. So far in our journeys, we’ve focused mainly on humor’s positive qualities, from its usefulness as a tool against oppressive governments to its ability to command — and earn — big money in the entertainment industry. But comedy doesn’t always turn out so well. Sometimes, jokes fail. And every now and then, a joke can fail so badly it can change your life.

Likely nowhere better illustrates this phenomenon than Denmark and Sweden. For the past seven years, the countries have been embroiled in their worst international crisis since World War II. People have been attacked in their homes by armed assailants. Newspaper offices have been retrofitted to resemble army bunkers. Citizens have gone into hiding, while others have moved away, vowing never to return. And in other countries, hundreds of thousands have mounted protests and riots targeting the two seemingly unexceptional northern European nations, conflagrations that have reportedly resulted in more than a hundred deaths.

And over what? A handful of cartoons depicting the prophet Mohammad — namely,12 cartoons published in Denmark in 2005, and another cartoon published in Sweden in 2007.

Many great minds have already tackled the Mohammad cartoon controversy, weighing in on everything from what it says about Scandinavian religious relations and media self-censorship and freedom of speech to how it signals the dawn of a new globalization of humor. Even the celebrated comic arts Art Spiegelman has taken a crack at it, critiquing the artistry (or lack thereof) of the cartoons themselves.

We have another goal in mind. We want to use these cartoons and their repercussions to explore humor’s dark and dangerous underbelly. Was there something unique about the cartoon medium that made these depictions of Mohammad so contentious? Would the response have been different if the artists had created formal paintings of the prophet instead? And what is it about couching such matters within visual jokes that has made both sides in the conflict– both the cartoonists and the newspapers who’ve refused to concede insensitivity, and the Islamic protestors who’ve promised bloody repercussions — so stubbornly intractable?

Finally, once we’ve figured it all, we’ll visit the strange and wonderful micronation of Ladonia. We’ve been practicing the official anthem, “Ladonia for thee I fling.”

Joel Warner and I have teamed up to explore the science of humor on a global expedition. Our project, The Humor Code, chronicles our adventures, scientific experiments and unintentional comedy along the way. 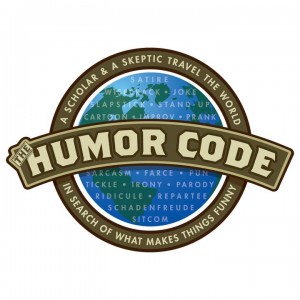