Are you more aggreeable and extraverted than a comedian?

I recently met Louis C.K. backstage before a stand-up performance (documented in this post). One striking observation was his demeanor during the performance was much more appealing than during the interview. Why? A large literature in psychology finds that people are strongly influenced by situational rather than dispositional consideration, and in that regard, he could have viewed me as a negative distraction from his pre-show routine (which involved eating a ham sandwich). Nonetheless, recent research makes me think that the onstage and backstage Louis C.K.’s are different people.

A study by Greengross and Miller compares the Big Five personality traits of professional comedians, to amateur comedians, comedy writers, and college  students. 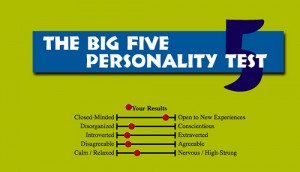 Here is the paper’s (excellent) abstract:

It is difficult to use the study’s findings to say that any one comedian is not agreeable, but the results suggest that comedians as a whole play a role on stage that may not reveal their true personality. Indeed, it behooves a comedian to be liked by an audience, which makes the audience more receptive to potentially off-color jokes. Moreover, simply getting on stage is an powerful act of extroversion that may not generalize to other situations (e.g.,, being the life of the party).