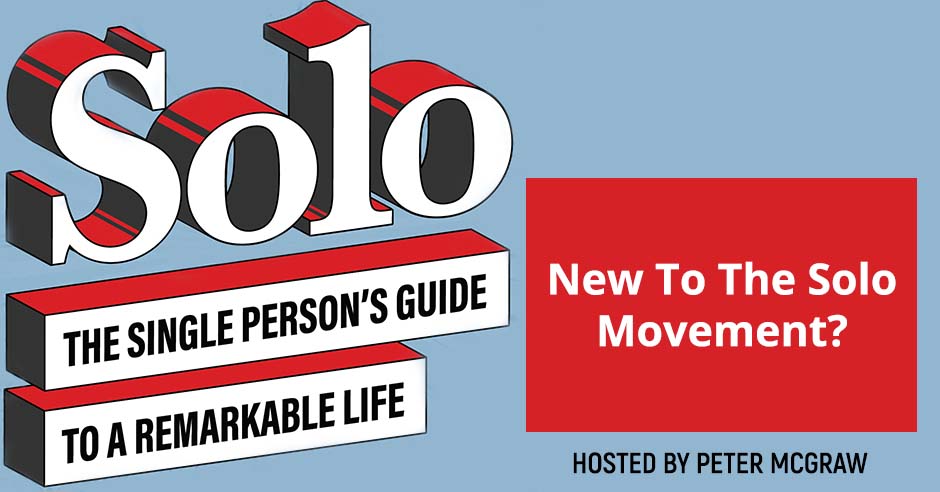 New to the Solo movement? You are not alone. More and more people are becoming aware that marriage is an overprescribed path to a good life. An observation reflected in rapidly changing demographics. One-hundred and twenty-eight million American adults are single, and 25% of Millennials are projected to never marry. Here’s a primer on Peter McGraw’s Solo projects, especially the Solo podcast. You will learn the seven episodes to start with.

If you saw the media coverage of the Solo Movement, perhaps on the Today’s Show, this episode is a short primer on how I’m supporting singles. If you’re a frequent reader, much of this will be familiar and you probably can skip it. I’m Peter McGraw, a behavioral economist, business school professor, and lifelong bachelor. Every twelve years or so, I reinvent myself, professionally at least. I began my academic as a Behavioral Scientist researching the interplay of judgment, emotion and choice. I busted my ass as an assistant professor in the academic rat race, answering questions such as, can people feel happy and sad at the same time and why does the TSA suck?

I published a bunch of academic research. You probably shouldn’t read it unless you have a problem with insomnia. My second act began before tenure as I switched my interest to uncovering the causes of humor and the consequences of comedy. As the Director of the Humor Research Lab aka HURL, I traveled the world, forced my friendship on comedians, performed standup and improv, gave talks, launched a podcast, and wrote a less insomnia-solving set of academic papers as well as a couple of books. It was a lot of fun, and it changed my life.

Solo is my third act. This act has three categories of projects. The first is advocacy. I want to provide for the unapologetically unattached a show and a book that I’m writing. I have a Solo community, which you can sign up for at PeterMcGraw.org/solo, an infrequent show on Fireside, and a bunch of Solo clubs on the social audio app, Clubhouse. The second category is events and public talks, including the launched Solo Salon, which was profiled in the Today’s Show segment. Lastly, scholarly work, especially Single Insights, The Science of Solos. I also offer keynotes.

When I launched the episode nearly 100 episodes ago, I had a vague notion of where I was headed. I think you’ll find that the sound quality improves with the more recent episodes as well as I found a voice. Thank you for your patience as you work your way through those. The goal of the show is to help transform you from a single to a solo. That is to recognize the value of personal autonomy, whether you’re single for now or forever. Solos don’t see a romantic partner as completing oneself. You’re already complete but that doesn’t mean that you’re alone. There are many ways to connect to friends, family, community and/or a romantic or sexual partner, whether that partnership is traditional or not.

Solos are also adventurous. They live on their edge and embrace re-invention. I suggest checking out the episode Solo Thoughts 5: A new narrative, in which I present for singles what I call the Three Rs, Recognize, Rebel and Reinvent. Some episodes bust the myths of single living, such as episode number two, The Science of Single Living with Bella DePaulo, or perhaps you might want to check out the episode on Attachment Theory, where we talked about the damage that Attachment Theory does to the psyche of singles.

Lastly, there’s a great scientific series on Solitude where we examine how spending time alone fosters personal growth, rejuvenation, reflection, and one of my favorite things to do, creative pursuits. Other episodes examine the norms that push people to partnerships, whether it’s good for them or not. Two episodes stand out and have changed my perspective in my life. One is with Amy Gahran and it’s called Getting Off The Relationship Escalator, in which we talk about the commonly accepted high status romantic sexual partnership that can crowd out other important relationships. That episode sets the stage for understanding how people diverged from it in order to find relationships that are a better fit for where they are in life.

Also, you might want to enjoy the two-part series on Waiting. It examines the divide that too many women face between being hopeful and hopeless as a result of the biology of reproduction. Finally, many of the episodes profile remarkable solos. If you want a spicy one to start, I suggest meeting who I called DTLA Josh, in the episode, Dating Friends And Sleeping With Strangers. It’s one of my favorites. Along the way, you’ll become familiar with many of the frequent sayings on the show such as ask for what you want, create more than you consume, and we are starting a movement indeed.

If you like what you read, please rate and review the show and tell proud and not so proud single friends and family. Hits like the Today’s Show help, but most of the growth for the movement comes from search and word of mouth. Before I close, I want to tell you briefly about two exciting projects that you might find of interest. As I mentioned, I’m hosting live events that I call the Solo Salon. In 18th-century France, salons were private gatherings that discussed literature, shared opinions about politics and the emerging sciences. Indeed, it was the age of enlightenment.

For many people, salons were as close as you could get to a university education. As they spread through Europe, they started to incorporate culture and entertainment such as music and poetry. The Solo movement is bringing back the salon to celebrate proud singles and there are a lot of you. There are 128 million adults singles in the United States. That’s nearly half the adult population. More than a quarter of households have a single occupant. That number is half of the adult residences in Stockholm are one person. One in four Millennials is projected to never marry. That’s a Pew Center study.

The salon gives people a chance to meet each other but it’s not a dating event. Why is that? It’s because half of American adults singles are not interested in dating or a relationship at the moment. It’s a fun night of music, comedy, talks, interviews and poetry sandwiched between two social hours. As you get to know me, you know that I like to dress up. People arrive at the Solo Salon in cocktail attire.

Lastly, one of the ways that marginal groups have gained acceptance is when businesses recognize that they have different needs. To that end, I’m launching Single Insights, The Science of Solos. As you may know, organizations are fixated on families, targeting them with products and promotions. By doing so, they end up fighting for the same customer, and yet singles like you are overlooked and undervalued. They have different needs. When organizations recognize this large and diverse group, they can help escape the competition.

Single Insights is a resource for managers, marketers, entrepreneurs and salespeople. For example, I wrote an article that details how often people do things alone. You won’t be surprised to know that singles do things alone more than partnered people. The businesses should better foster, welcoming these singles into their retail spaces. That’s it for now. I have some exciting episodes in the queue. Thank you for joining the Solo movement. Let’s get started.

Waking Up Early With Donnie

How to Parent Alone – Part 1

The Queen Of Meaning – Lisa Lampanelli