When is it “too soon” to tell a joke?

There are two prominent issues related to comedy and timing:

One has to do with the way that a joke is executed: how quickly it is uttered, where the punch line is placed, when to pause, etc. I will save this issue for a future post.

The other has to do with whether sufficient time has passed before it becomes acceptable to make jokes about some (typically tragic) event.

What is meant when someone says a joke is “too soon”? According to the Urban Dictionary: 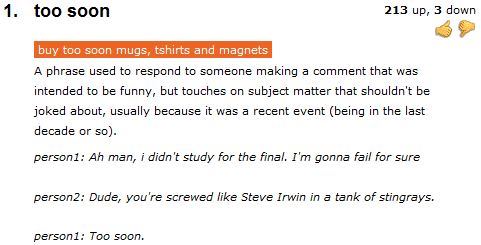 Amy Davidson of The New Yorker recently asked, “Can we laugh now at Osama bin Laden?” Well, it doesn’t seem like people waited. Immediately after the report of his death jokes popped up in the twittersphere:

A possible “too soon” moment came up at an an “offensive t-shirt party” I recently hosted. The party was about a week after the Japanese tsunami, and this shirt won the “most offensive” award – but it also got laughs. 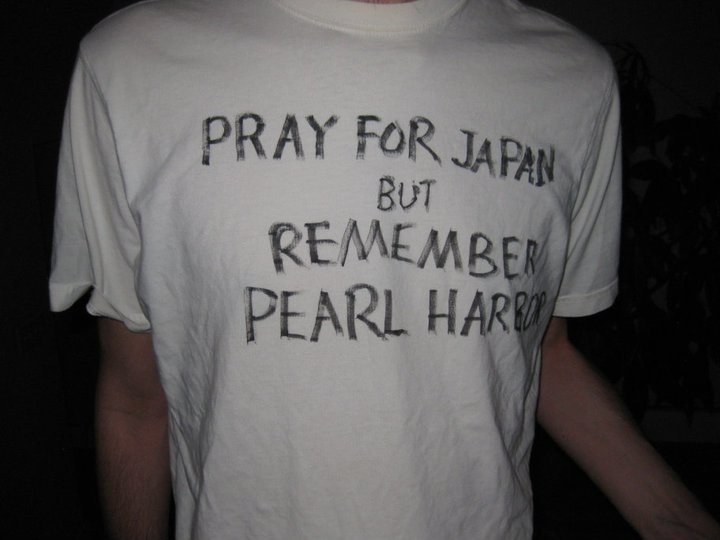 The Humor Research Lab (aka HuRL) has been using the benign violation theory to examine the issue of timing and humor. For humor to occur, the theory proposes that a situation must be seen as a violation and also okay in some way. One way a violation can be seen as okay is psychological distance. For example, when sufficient time passes, a violation, such as a tragic tsunami, becomes less threatening and thus joke worthy. In the case of the t-shirt, a benign appraisal seems facilitated by the suggestion that the Japanese are not completely innocent (i.e., deserving of their fate). In the same way, many Americans saw Osama’s death as deserving, which helps explain the immediacy of their jokes.

Our work also reveals a sweet spot with regard to the passage of time. After a lot of time has passed the distance may be so great that was once a tragedy, such as Steve Irwin’s death, is no longer a violation (i.e., it is purely benign). In this way, jokes can also be “too late.”