When guns are fun (and how to survive a zombie apocalypse)

I am not a gun person. Nonetheless, I was recently invited to a Colorado ranch to do some target shooting. With an arsenal (no exaggeration) laid out before me, I selected a “street sweeper” shotgun and started shooting ceramic targets. And I was good. Scary good. 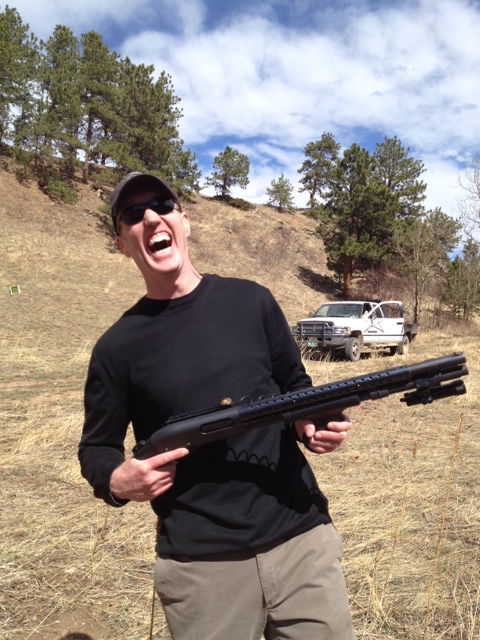 I also enjoyed myself, which got me puzzling over a question:

How is it that something that is seemingly so dangerous, so scary, can be so much fun?…

I think that the short answer is “safety.” The group I was with agreed to a set of rules to follow (e.g., never point a gun at someone else even if you know it is not loaded). Moreover, I was with a group of people who I trusted (i.e,. there were no known psychopaths in the group).

Psychological science supports my answer. For example, Richard Apter proposed reversal theory to account for these kinds of situations. He proposed that a protective frame can help transform anxious situations into exciting, enjoyable ones. For instance, falling out of the sky is terrifying, but when you have a parachute on your back, it transforms into exhilaration. In the same way that the parachute provides a protective frame, so did the rules the gun group agreed on. (Note: Eduardo Andrade used Apter’s framework to understand why people can both be scared by a horror film and take pleasure it in.) The whole idea is reminiscent of the psychology behind the benign violation theory; how potentially negative situations can become funny by seeing the situation is okay in some way.

The fantastic; and the zombie apocalypse (training) video.

Another (related) reason is fantasy. By taking some real, potentially threatening situation and seeing it as not based in reality can also facilitate enjoyment. I recently returned to the ranch with a group of friends, but this time we brought zombie targets. The running joke of the day was that the zombie apocalypse was on. We made the circumstances related to shooting absurd by suggesting we were running from zombies. The running joke helped us see the the situation as playful (and thus less scary).

Drawing from the theatrics along the way, Rich Maloy made the video below.  Note: It receives an ‘R’ rating because of violence (duh) and strong language (some MF-bombs).

I also asked some of the members of the Z-Team to tell me, “Why was shooting so much fun?”. Their answers echos my thoughts above:

…and the mastery of that, which is why it’s more fun to hit things than not.

Guns are fun when you treat them like sport. In my mind, they’re fun because there’s a rush at hitting the target – or being a good marksman. That said, we both know that I rarely hit a target – in which case, guns are not so much ‘fun’ but important to become comfortable with. It feels powerful to take something that is really quite scary (in that it has the power to immediately kill you) and learn how to handle/become functional with it.

It’s nice to know that if shit hit the fan, I could load and shoot a gun with reasonable competency.

I had shot guns before, but that was long before all the trouble with mass killings in the US, so I was wondering how it would sit with me, especially with the recent theater shooting in Aurora. Should I take a moral stance against guns because of some psycho’s rage? Would it be hypocritical to partake in shooting for fun in a world where people seem to use mass death as a means of expression? (albeit, supremely fucked up expression)

But when we got out to the mountains and picked up the guns, I didn’t feel any sort of concern. I think I was afraid of feeling a connection–as if picking up a gun somehow would connect me to the crazies we read about in the news. (‘Part of the solution or part of the problem’ comes to mind.) That didn’t happen. It was a tool, an object. I understood the deadliness of it, respected it, but knew instinctively I could never, ever use it to take another human’s life.

Being able to separate myself so distinctly from the potentiality of murder enabled me to enjoy the experience. In my hands, a gun, normally a weapon of lethal possibility, simply wasn’t, because I won’t let it be. As a result, I could cut loose and have fun with friends, shoot targets, and treat the gun as a piece of sporting equipment.