Singles and Their Pets

Americans (and much of the world) are obsessed with their pets. The majority of U.S. families have a pet. Indeed, pets factor into the American dream: a house, car, kids, and a dog for the kids.

Yet most of the growth in pet ownership is happening for singles. Anyone who has spent time at a dog part or a dating app already knows that.

Are there differences between singles and non-single pet ownership?

Intuitions suggests that the answer is “yes.” For example, I ran a Twitter poll that found that people expect singles to be more likely to have their pet sleep in their bed.

And then there is the crazy cat lady stereotype, which is just that.

Out of curiosity, I surveyed 250 single and partnered pet owners (of mostly dogs and cats) about why they own a pet, their relationship with their pet, and how their pet affects their lifestyle.

First, the two groups were more alike than different.

There were some differences that stood out.

The first difference was the question about “what is the most important reason you keep a pet(s)?” The options were: companionship, love/happiness, meaning/purpose, protection, and “other.” 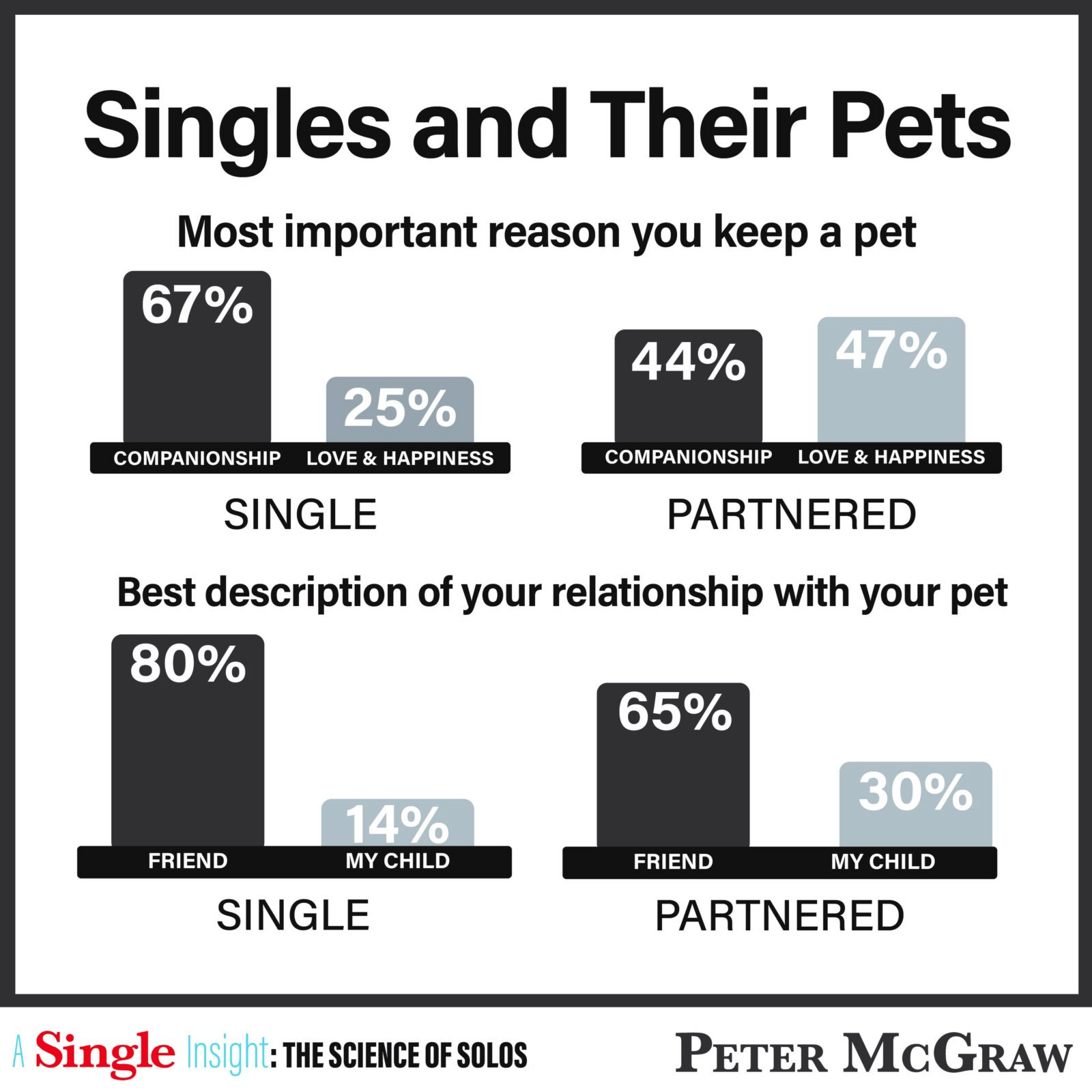 Another difference that emerged was about traveling with pets and choices for vehicles. Despite being more likely to see their pet as a companion, singles were less likely to travel with their pet (26%) than partnered people (47%). Moreover, singles were less likely to have their choice of vehicles affected than partnered people (11% vs. 22%, respectively). I don’t have data on this, but my hunch is that people with families need an even bigger car in order to fit Fido.

The final difference was huge, but not surprising.

As alluded to above, if you have spent any time on the dating apps, you will invariably come across people who say, “You must love dogs.” (Translation, “You must love my dog”). Other people will go as far as saying that their pet will go on all dates or “you will always be second to my pet.” (That is an actual quote).

Consequently, I also asked respondents who they would choose “between your pet and your partner.”

Seventy-eight percent of  singles would choose their pet (probably or definitely) over their partners versus 24% of partnered people.

The only other finding that stood out was when asking people what is the more “ridiculous” thing they have done for their pet, singles were more likely to throw their pet a birthday party:

She had a full-blown birthday party. There were cupcakes, treats, her friends, and even gift baskets.

I had a big birthday party for him when he turned 10 and it was so over the top and silly but I loved it and had fun. He got a lot of doggy gifts and he loved playing with everyone there. I invited all friends, family and even some coworkers.

I thought that there would be bigger differences, and thus, this is a gentle reminder that what we assume will be differences (whether between the genders or between singles and non-singles) are bigger in our mind than reality.

That said, I do have one piece of advice for any pet-related products: show more solos with their pets in your advertisements. There are a lot of them out there.

Dr. Peter McGraw—a behavioral economist, business school professor and bachelor—hosts the podcast Solo—The Single Person’s Guide to a Remarkable Life. His solo clubs on Clubhouse are home to more than 200,000+ members. As the Director of The Humor Research Lab (HuRL) and two-time author (The Humor Code and Shtick to Business), McGraw speaks at Fortune 500 companies, public events, and universities around the world.