Are you visiting a haunted house in the couple weeks? I’ve observed two kinds of comedy associated with haunted houses: 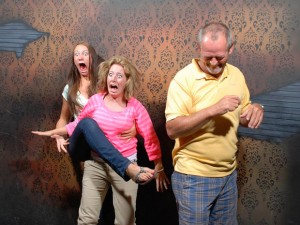 Both seem to be happening here. Check out more here.

Alf Lamont, a friend and supporter of the Humor Code, wrote an article about horror and comedy for Huffington Post. In his post he describes accosting Wes Craven and asking him about horror and humor:

Yes, the Wes Craven. The man behind Nightmare On Elm Street, The Hills have Eyes, and Paris Je T’aime. He was doing a Q&A at the Cinefamily after a screening of People Under The Stairs in Los Angeles and I decided to press him on the use of levity in his films.

“Horror and comedy are like brother and sister,” is the only line I dare quote directly, since I wasn’t really taking notes when he answered my question.

Haunted houses are funny because they often fit the conditions with the benign violation theory. The theory proposes that humor occurs when a situation is simultaneously seen as wrong, unsettling or threatening (i.e., a violation) and okay, acceptable or safe (i.e., benign). 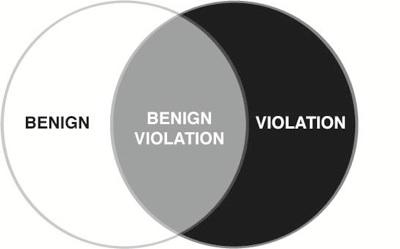 Haunted houses do exactly that. They scare people in a safe way. Right?