Nick Justicz wrote a guest blog post for me a few months ago (see Humor and The Pianist). He did such a good job, I invited him to do another. Tell me what you think. Should the invitations continue?

“That’s like, almost not cool” an onlooker exclaims (with nervous laughter). Indeed, a widely-viewed YouTube clip that shows a ferocious lion attempting to eat a zebra-dressed baby is hilarious to some and appalling to others.  Some viewers look at this video and laugh it off as a harmless joke, while others believe the child’s parents are terrible people.  How could a short video clip elicit two very different reactions?

From the perspective of a benign violation account of what makes things funny, it’s easy to see how the video could be so divisive.

Some viewers see humor in this video because they see a benign violation.  A lion trying to eat a baby (a highly threatening situation) is made benign by a sheet of safety glass. In addition, the video potentially contains a moral violation: parents who are not concerned with their child’s well-being. According to McGraw and Warren (2010), “a violation may seem benign is if a situation violates a norm to which people are only weakly committed” (1144).  In this case, the norm of good parenthood is being violated. By allowing the child to be in the vicinity of a large lion the baby’s parents seem less than committed to the norm of keeping children out of danger.  But because there is still some commitment to the norm (the child, after all, is physically safe) the violation is benign, and the situation is remains humorous.

However, some viewers do not see a benign violation, but rather just a violation. These upset viewers are most likely offended because they feel the parents are emotional detached and willing to leave a child in front of a ferocious carnivore without thinking twice.  They perceive emotional neglect and lack of commitment to safety.  In their eyes, the parents aren’t weakly committed to good parenthood – they aren’t committed at all.

Therefore, the difference between the viewers who laugh at this video and those who don’t is (likely) their commitment to the norms of good parenthood. Those who are weakly committed to the norms of parenthood will inherently find more situations benign and find more things to joke about.

Take, for instance, the popularity of “dead baby jokes.” The dead baby joke genre (if one can call it that) has thrived for decades. For those who are civilized enough to be unfamiliar with dead baby jokes, they follow a fairly straightforward formula: maximizing shock value by painting a portrait of something terribly heinous involving deceased infants. For example:

Obviously, not everyone is going to find these jokes funny. While a group of teenage boys might feel it is safe to joke about something as psychologically distant as dead babies, the mother and father of a newborn might feel differently. The difference lies with the person listening to the joke and his or her commitment to the norms of parenthood.  Those who are committed to keeping children safe do not joke about it, while those who aren’t make jokes that fill up entire websites.

The code of parenthood

It seems inevitable that different groups of people will share different belief systems and find different things funny.  When it comes to the well-being of children, parents and non-parents will likely interpret situations in separate ways.  It’s possible that when one becomes a parent, the commitment to the norm of child safety becomes stronger. When this happens, priorities change, values change, and inevitably, so does one’s sense of humor. 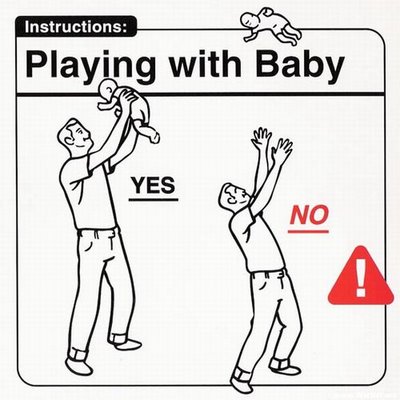 However, perhaps these two groups can find some common ground on what constitutes being funny.  At least one comic strip pokes fun at child safety, while at the same time instructing the viewer a proper norm of parenthood as well.  Crossover comics like this, though perhaps not as “edgy” – appeal to a broader base and are therefore, perhaps, a good example of the potential therapeutic nature of humor.

How To Save Money