You’ve seen it on Mad Men: The agency’s creative staff whiles away the noon hour with a liquid lunch of Old Fashioneds, then pops back into the office and whips off a whimsical Lucky Strike ad campaign that gets the masses chomping at the bit for tobacco sticks.

But does this sort of debauchery really lead to successful marketing campaigns? In particular, does it help generate humorous advertising?

Humor is considered one of the best ways to cut through a cluttered marketplace and capture the attention of jaded consumers, especially nowadays. And, as anyone who’s ever been to a comedy club can attest, alcohol and laughs go hand in hand.

We know booze can boost humor appreciation, since it lowers inhibition, decreases anxiety and increases positive mood. In a 1997 study, for example, social drinkers were asked to watch 20 minutes of goofball comedy The Naked Gun. Those who were two drinks in found O.J. Simpson’s bumbling Officer Nordberg significantly funnier than those who watched stone-cold sober.

But can alcohol fuel humor creation? Very little research has been done on the matter. To investigate, we cooked up a little experiment involving advertising creatives, a funny marketing campaign and alcohol — with an emphasis on the alcohol. 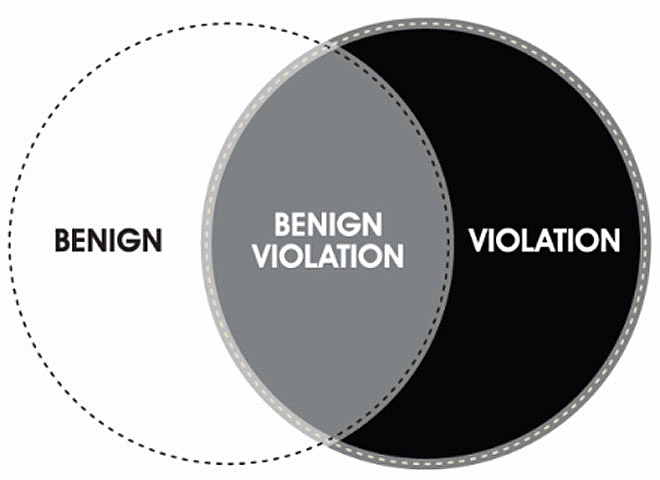 Our plan: Invite one of the funniest creative teams from one of New York’s largest ad agencies to a night on the town, and ask each member to sketch out funny ads, back-of-the-napkin-style, after downing some drinks. We’d foot the bill.

The team was surprisingly eager to participate and had a destination in mind: The Hurricane Club, one of the ritziest (read: priciest) juice joints in Manhattan.

Their assignment was simple: First, study the Venn diagram (above) that Pete uses to illustrate the Benign Violation Theory, his idea that humor only occurs when a violation is seen as benign. Next, polish off a cocktail and come up with a funny new Venn diagram that illustrates and promotes the concept. Then, proceed to take down another cocktail and draw another new diagram. Repeat, up to five cocktails.

With that, they were off, in a flurry of Mai Tais, Bellinis and mojitos. Several blurry hours later, we shook off the sangria and spiced rum from the results, then handed them over to the University of Colorado’s Humor Research Lab for analysis.

To be honest, there were several limitations to this exercise from the get-go. For one, the Hurricane Club, with its encyclopedic drink menu, doesn’t lend itself to a controlled experiment. For another, we didn’t expect the team’s creative directors to immediately begin heckling their underlings, demanding between swills that everybody give 110 percent, dammit.

A combination of stress and depravity ensued, and everyone went waaay over the line in terms of decency (after all, there were no stuffy corporate clients to offend). Which is why we can’t show you the most audacious diagrams, and why we’re respectfully withholding the name of the ad agency. (It could very well cost them some business.)

For a glimpse into the level of abandon we’re talking about, here’s one of the Venn diagrams from that night: 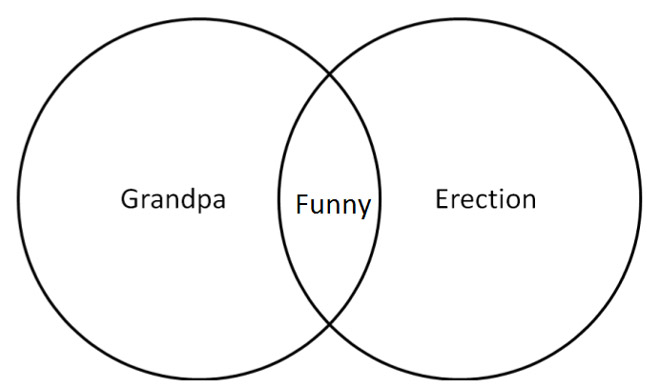 Compared to some of the others we don’t have the stomach to display here, this example is sedate. (Although if you really want to see the NSFW stuff, you can check them out on our Humor Code website. Just don’t say we didn’t warn you.)

But we digress. After each new ad they sketched, participants rated how drunk they felt — from “sober” to “shit-faced” — and how funny they considered the ad on a seven-point scale, from “slightly amusing” to “hilarious.” The data clearly show that the more drunk our mad men and women became, the funnier they believed their humor attempts to be: 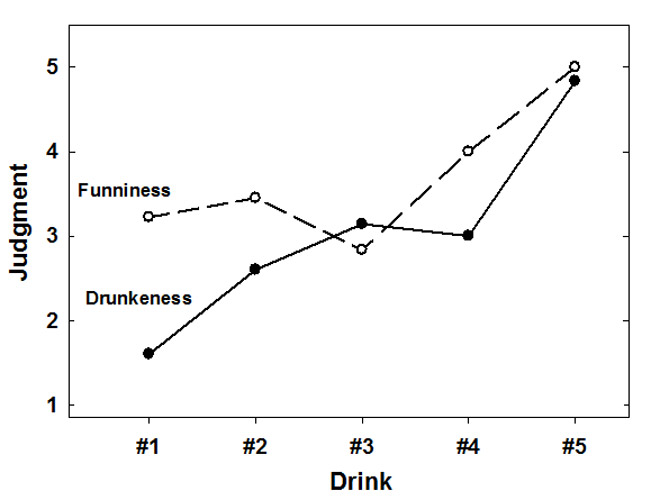 But did other people agree? With the help of one of Humor Research Lab’s grad students, Julie Schiro, Pete took the 30 Venn diagrams sketched by the 10 participants from whom we obtained usable data (the results from the other two participants were too sloppy to even analyze) and submitted them to an online survey panel. There, 60 respondents rated each diagram on a seven-point scale in terms of humor and offensiveness: 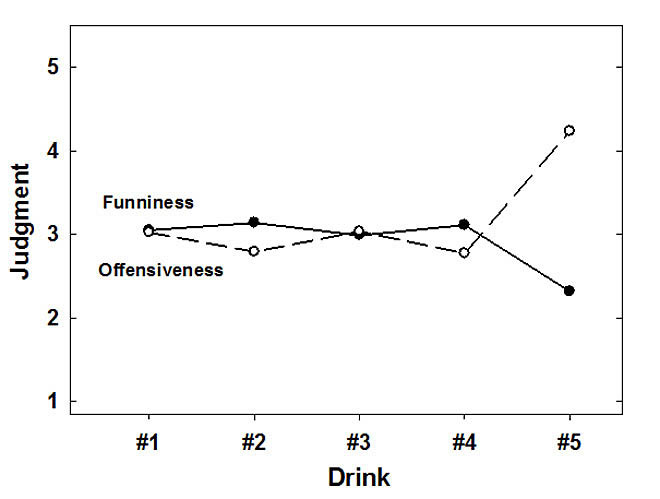 As you can see from the results, the drunken advertising creatives were wildly off the mark: The Venns generally became less funny by the time our participants downed their fifth and final drink of the experiment (which only three did; most bowed out in an inebriated mess before making it all the way through). Not only that, but the diagrams also became more offensive. Take, for example, one creative director who went by the code name “Blaze.” After his third drink, he rated himself about halfway up the drunkenness scale and hatched this gem: 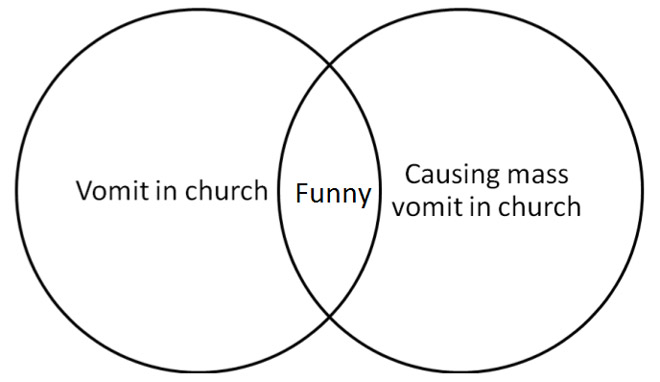 He gave it a 4 on the funniness scale, compared to the online-survey respondents’ rating of 3.5. Pretty similar. However, things changed as the night wore on. Blaze concocted this Venn after his fifth drink: 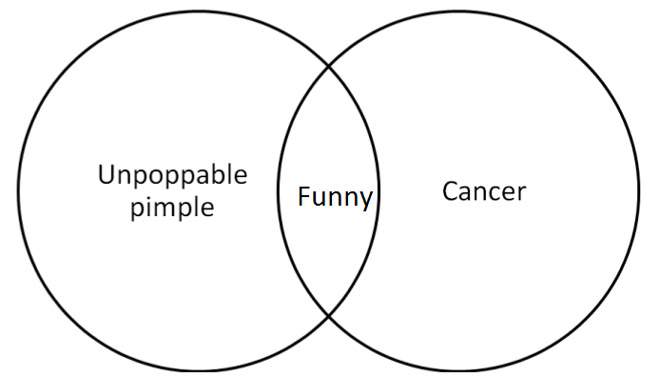 He rated it a 7 (i.e., hilarious). The online panel resoundingly disagreed with an average humor rating of 1.95 (i.e., slightly amusing) and an average offensiveness rating of 4.2.

In the end, the Mad Men experiment shows us that using alcohol to fuel humor creation does tend to make things funnier — but only for those making the funny. So be warned: If you hire an agency known for boozy hijinks to dream up your next big advertising campaign, get a second opinion before you reveal it to the prudish masses. In fact, we’d be happy to analyze it for you. Just don’t expect us to pick up the bar tab.