Twitter recently surpassed 200 million users, and it is about to get a few more. I am asking my consumer behavior students to use it as part of their course “engagement.” From my syllabus:

You will be evaluated based on the quality and quantity of your participation in class and on the clashtag (#m3250), as assessed according to relevance, depth, sincerity, and consistency. (There is no expectation that anyone “follow” anyone else.)

Class + Hashtag = Clashtag. Get it?

I asked Linds Panther (@lindspanther) to write about why business students should be on Twitter. Linds is a former student and current member of the class’s Board of Evaluators (more about that later).

Ask someone who is unfamiliar with Twitter whether they could see themselves using the service, and it’s likely that they’ll respond, “Why would anyone care to hear about what I ate for breakfast?”

A common misconception of Twitter is that it’s all about tracking brief updates about what one person is doing throughout his or her day. On the contrary, Twitter provides much more, allowing instant access to diverse conversations and the exchange of real-time information on a global scale. For example, many recent news stories are first reported on Twitter (e.g, Osama Bin Laden’s death). Twitter, moreover, facilitated real-time text, photo and video updates for on-the-ground reports of Hurricane Sandy and the Boston Marathon bombing.

Not only has Twitter accelerated the change in how you consume news in the digital age, but it has also fundamentally shifted how consumer brands across a wide array of industries reach their consumers. While brands are often quick to associate themselves with technologies that draw a large base, because of Twitter’s conversational capabilities, these same brands have needed to develop new strategies to stand out within the mass market: through meaningful dialogue that resonates with their audience.

Marketers are using it

Marketing managers often use the term “earned media” to describe the results of their social media efforts, but for the brands reaping the benefits of a strong Twitter presence, it comes down to creativity and adaptability. In a recent case, Nabisco, the parent company of Oreo (@Oreo), seized a golden opportunity during the blackout of Super Bowl XLVII by using Twitter to pull off a timely campaign on the biggest advertising stage of the year. Similarly, Proctor & Gamble, parent company of Old Spice (@OldSpice), famously took to YouTube, Facebook and Twitter during its 2010 The Man Your Man Could Smell Like campaign to encourage users to submit questions for The Old Spice Man. The hand-picked entries received a personal video response that was produced and published to YouTube within just a matter of hours. In addition to raising the bar for marketers and agencies looking to reach consumers, Twitter’s proliferation has also changed the way consumers communicate with brands.

By default, every Tweet is made public on the network and accessible to anyone on the web. Transparency means that brands are no longer solely in control what’s being said about their products and services. Instead, it’s what their consumers are saying about them that ultimately shapes the brand. This means that the power of voice has effectively shifted from corporations down to the individual. To see this effect in action, just look for a Twitter user who has publicly Tweeted his or her discontent with a brand. Due, in part, to this leveled playing field—one that promotes transparency in dialogue—Twitter tends to be the most effective route for getting a response to a support-related inquiry for many of the top consumer brands.

Aside from being the go-to destination for breaking news and dialogue with consumer brands, Twitter represents an important avenue for personal brand development, too. Everyone from thought leaders, industry experts, athletes, celebrities and corporate executives are using Twitter daily to interact directly with their followers and attract new ones. Legendary Skateboarder Tony Hawk (@TonyHawk) and his team run an annual Easter egg hunt of sorts using Twitter to reveal the location of various goodies that have been hidden around the world. Newark, NJ Mayor Cory Booker (@CoryBooker) is known to interact with constituents on a regular basis via Twitter. While some of the world’s most influential and recognizable people have found their voice on Twitter, it’s far from an exclusive community of individuals. 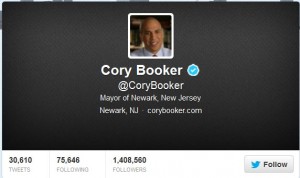 Twitter makes it simple to listen to, and communicate with, any of these people across the globe, instantly. Unlike other digital forms of communication such as email and text messaging, which allow one person to communicate with specified individual or group of recipients, Twitter allows people to share thoughts and information on a truly global scale. For the millions of users who access the service regularly to follow the people and companies they care about, Twitter represents an important medium for discovering and organizing with other like-minded individuals.

Within Pete’s consumer behavior class, Twitter will add a new dimension to the course by enabling students to engage in fast, back-channel communication and access information inside and outside the classroom. It will serve as a substitute for message boards within the course website.

I expect a mixed reactions to the use of Twitter in my course. I am optimistic, however, that most students will eventually find value in the tool. Importantly, Twitter should increase the ease with which students will communicate with each other. I also predict that brands and members of the business community will be drawn into the conversation on the clashtag (#m325), thus improving value to the class.

If you are not familiar with how to use Twitter, here is a primer on the microblogging tool. If you prefer a book, check out @markwschaefer’s book The Tao of Twitter. (At least one professor is going even further, using Klout scores as part of the evaluation of a course project.)

There is not much research on Twitter. One paper finds that Twitter helps increase engagement within a consumer behavior course:

Marketing professionals use Twitter extensively for communicating with and monitoring customers, for observing competitors, and for analyzing chatter concerning brands, products, and company image. Can professors use Twitter to engage students in conversation about a marketing course? The authors argue that Twitter has many benefits for marketing educators who are interested in engaging students in experiential learning. In a real-time environment for student learning, professors may use Twitter for direct communication with students to generate discussion and interest in the course topics and examples. Just as marketers use Twitter to generate interest, discussion, and brand image, educators can use Twitter to generate this interest in a course through social media. Furthermore, Twitter is a fast, easy method for making announcements, solving student issues, and performing course-related administrative duties. In three studies, both quantitative and qualitative data suggest that when students engage in Twitter use with the professor, students feel better prepared for future careers. In addition, students indicate that Twitter facilitates achieving traditional educational goals. The qualitative data offer insights into potential problems. Suggestions for educators interested in using Twitter are offered.

Business Insights From The Science Of Singles