Lisa Lacy at ClickZ recently wrote an article about making humorous videos. In it, Caleb Hanson of Rapt Media says he finds the benign violation theory to be a useful model:

Humor is a potentially powerful weapon in a brand’s arsenal, but they must be savvy when they wield it in video form. That means in part creating relatable content that isn’t too long and tells a brand’s story.

Laughter is often said to be the best medicine, and when it comes to digital marketing, it certainly presents unique opportunities for consumer engagement.

Like the social outcast who discovers he can make the star quarterback laugh and finds himself suddenly catapulted into the upper echelons of high-school society, a funny branded video can quickly engage an audience and raise a brand’s social currency.

But, like that kid in high school, the telling of the joke comes with immense risk: Fall flat and you’ll be ridiculed forever…or at least until the next bad joke comes along.

According to Caleb Hanson, vice president of product for interactive video firm Rapt Media, humor is innately shareable. If a brand is “baked into the joke, or at least prominently featured in the video,” it can clearly benefit from huge viewership.

A funny video can also inspire consumers to spread content who might not otherwise advocate for a specific brand.

At the same time, humor is dangerous because it can so easily go wrong.

“I subscribe to [University of Colorado associate professor of marketing and psychology] Peter McGraw’s ‘Benign Violation’ theory about humor, which is that for something to be funny, it has to be a violation, but one that is seen as harmless,” Hanson says….

Read the rest of the article HERE.  More about the Benign Violation Theory.

PS I received a note the other day from an acquaintance calling my attention to the following video. He said:

In case, you have seen this commercial, I think it is the best example of humor in advertising I have seen in decades.  Following your model, this commercial violates quite a few principles but first and foremost the idea that women do not talk about defecating.

What do you think? 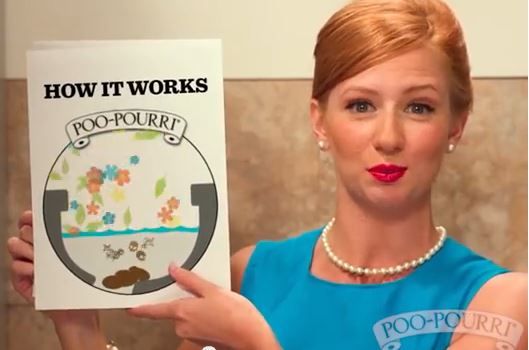