As you probably know, I’ve been working with a journalist, Joel Warner, on a book about the science of humor. A 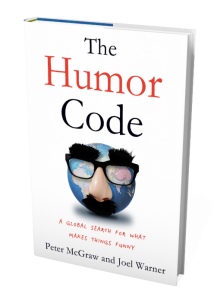 This is not an April Fool’s joke.

During our travels we questioned experts, from Louis C.K. to rat-tickling researchers, and answered pressing (and less-than-pressing) questions such as, “What’s the secret to winning The New Yorker cartoon caption contest?” and “Who has the bigger funny bone—men or women, Democrats or Republicans?” ]

And as a final test, I attempt stand-up—at the largest comedy festival in the world.

I repeat. This is not an April Fool’s joke.

There is a saying that publishers print books, and authors sell books. So here is my shameless self-promotion:

Do you know someone who likes comedy or travel? Our website, humorcode.com, contains links to places you can find an electronic or hardcover version, including how to find it at your local independent bookstore.

We also some fun events coming up:

–The Humor Code takes over Tattered Cover (on Colfax)

Thank you for all your support.

Traveling and writing The Humor Code changed my life. I wonder how much its launch will change things further.

The Bachelor In Colonial America And Beyond

Being A Professional with Mark Masters

Another Benign Violation: Roast Me