Is the Stanford Band funny?

I recently sat down with some of the writers from the Stanford Band to talk about the band’s (oft infamous) use of humor and how it relates to a benign violation account of what makes things funny. (And when we were done, I went with them on the All Campus Band Run.) 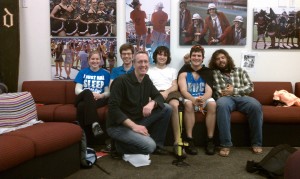 In last week’s post, one of the writers (@WebbKevin) talked about the history of “The one, the only, the truly incomparable Leland Stanford Junior, University Marching Band!” (aka TOTOTTILSJUMB). He returns to discuss his reaction to our talk.

The more I think about this concept, the more I think it affects our writing process. One of our strongest assets is that we are, collectively, nearly impossible to offend. There’s a bus song called “the S and M man,” which gets predictably terrifying, and hookups are chronicled with mass-emailed limericks.

But that means that we tend to see almost anything as being more benign than most people might, which makes us want to lean more toward violation for humor. Our only metric for a successful field show is against ourselves, and the ones people remember are universally the ones that made some people feel violated. We generally find that fact hilarious, but I think with time and distance, most people come around to our side.

Of the shows I’ve helped write, the one that has gotten the best overall reaction was the Joe Francis show. It highlighted Girls Gone Wild founder Joe Francis as USC’s only successful alum, but it wound up being much more of a violation to SC fans than we thought it’d be because: A) it was their homecoming show, and B), Stanford dominated 55-21. (Stanford fans, SC detractors, and feminists, on the other hand, loved the show. The Huffington Post wrote an article about it here). 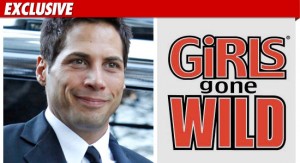 Oddly, the complaints USC fans had were violations we didn’t even intend: they saw a penis on the field (we didn’t form one. We’ve done it before, and that time we just made a formation badly), and one fan saw a father raping his daughter. Ah, USC.

Is the Stanford Band funny? Well, it depends on your perspective. The Band think they are funny, and I think they are funny, but it is easy to see why other folks think otherwise. The Band’s approach to humor nicely demonstrates the vast individual differences in humor perceptions and the two ways that humor can fail: What one person sees as boring (perceiving a purely benign situation; e.g., people who don’t see the violations) another sees as offensive (perceiving a malign violation; e.g.,USC fans and Joe Francis, himself). In the case of the Stanford Band, however, few people fail to perceive the violations and thus the band either amuses or offends. Said another way, they will rarely bore you.