I have been asked to a give a talk at a law and well-being conference today. The title of the talk is:

A talk like this makes me think about my humor research in new ways. When people consider humor’s effect on well-being, their first instinct is to think about humor’s benefit, but they often overlook the (non-trivial) risks of pursuing humor.

Happiness – humor helps enhance well-being by creating positive emotion. Humor typically increases positivity and decreases negativity.  Moreover, the act of creating something humorous can help people cope with pain, stress and adversity. (As an aside, when people tell me about their bad day, I often say, “Sometimes you’re the hammer, and sometimes you’re the nail.” It often gets a laugh and reminds people that not every day will be like that.)

Relationships – humor enhances well-being by enhancing how people get along. Humor helps smooth interpersonal and cultural exchanges by reducing conflict.

Before getting to the risks, it is helpful to describe what causes things to be humorous in the first place. If you are a regular reader, you will already know the answer: benign violations. The benign violation theory proposes that humor occurs when a situation is simultaneously seen as wrong, unsettling or threatening (i.e., a violation) and okay, acceptable or safe (i.e., benign). 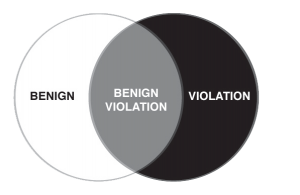 The theory explains why humor creates the positive emotion amusement: taking something that is wrong and seeing how it is okay transforms something bad into something that is good. The theory also explains why humor facilitates coping: creating humor takes violations and transforms them into less threatening and more pleasing benign violations. Finally, the theory explains why humor helps relationships: in addition to creating happiness and helping coping, which are good for relationships, humor also signals that two people will get along. People who have similar values, beliefs, and interests share the same perceptions of the world and thus will see the same things as wrong and okay (i.e., as benign violations; See my previous GSOH post for more details)

Another way that humor can hurt well-being occurs when you make some people laugh, but not others – that is when humor is used in an aggressive way. Consider the difference between teasing and bullying. Teasing brings people closer, whereas bullying sets them apart.

Finally, research by Thomas Ford and colleagues shows yet another way that humor can hurt. If someone has an existing prejudice, such as sexism, that exposure to jokes about that prejudice can activate discriminatory behavior. (Check out his paper: Ford, T. E., Fitzgerald, C. M., Armstrong, J. A., & Edel, J. R.  (2008).  More than just a joke: The prejudice-releasing function of sexist humor, Personality and Social Psychology Bulletin, 34, 159-170.)

What I haven’t addressed here is the implications of a benign violation account of humor for law. Come back later (not next week anymore) for those thoughts.

Having A Motor with Bob Mankoff