Guest post: Turn your kid into a comedian for everyone’s sake

So your three-year-old comes home and tells you that he wants chocolate for dinner.  Now what?

If you’re anything like me, you start by trying to sell him on what else you’ve prepared.  This approach doesn’t work very well, and then he throws himself on the floor.

When this happened recently, I took a deep breath and reached for inspiration from one of the best advice books out there: “Playful Parenting” by Lawrence Cohen.  The fundamental point is that you can often get better behavior from humor vs. so-called discipline.  With this inspiration, I turned to my three-year-old and showered him with praise for telling such a side-splitter:  Harry wants chocolate for dinner!  Everybody, come over here so Harry can tell you his joke himself.  Harry KNOWS that we eat chocolate only for dessert, but he’s pretending he wants it for dinner!  Everyone, Harry is so clever to tell such a funny joke.  Meanwhile, my husband, older son, and I are smiling and clapping for him, and pretty soon the little guy is walking over to the dinner table for spaghetti.

You know, everyone likes it when some social scientist comes along and shows them why it’s a good idea to do what they were already doing, while giving them a novel justification they didn’t already have handy to tell the in-laws.  This is one of the many appealing features of Peter McGraw’s benign violation theory of humor.  The benign violation theory is elegant and has predictive power from business marketing to managing three-year-olds.  As a guest blogger for Pete, I shouldn’t go ahead and describe his whole theory—but, just in case you ended up on his page while trying to buy shoes—let me briefly summarize. McGraw argues that humor is at the intersection of what is benign and what violates norms.  If a three-year-old asks for noodles, that is not funny because it’s not a violation.  If a three-year-old tries to hit his ten-year-old brother with a baseball bat, that is not funny because it isn’t benign. 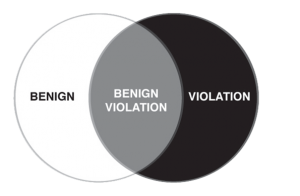 Kids are natural comedians, and the benign violation model suggests a reason why: They are always learning the rules, and humor gives them an outlet for the many, many times they get the rules wrong.  They make so many mistakes, and it could be frustrating if they couldn’t have the sense of relief that it is okay.  Let’s be honest with ourselves as parents to say that sometimes the rules are so arbitrary that it’s easy to break them.  It’s okay to have a scone or muffin for breakfast, but not cookies or cake.  Guess what a scone really is?  And, as far as I can tell, a muffin is just cake without the frosting. Kids see through this, and it’s confusing.  And which meals get dessert afterwards?  Why can you have chocolate milk but not a piece of chocolate with a glass of milk?  That makes no sense.  And why wouldn’t you put ketchup on literally everything you eat?  You know that we parents would do a lot of these things if no one was looking.

By using humor to recover, we can prevent a showdown.  Life is sometimes overwhelming for three-year-olds.  By releasing the tension that they did something 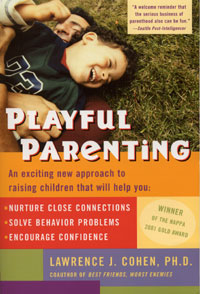 wrong, we save face for the little ones.  Humor shows both pieces: it is benign enough not to be the end of the world, but make no mistake that it was wrong.  By using the playful parenting method, you give them credit for knowing that what they did was a benign violation, and they are the ones who got to make the joke.

The benign violation theory can help us predict what kids find funny: it’s what is just at their learning level.  It’s not funny if they definitely get it, or definitely can’t get it.  They find funny what’s in the middle, where there is a struggle to define what’s right yet they are in the process of figuring it out.  Peekaboo doesn’t work until babies start on object permanence, and it doesn’t work for teenagers.  Children laugh at things to show off to you, by giving you the meta-knowledge to know they know these are violations.  We try putting clothes or shoes on the wrong person, or putting things on our head that don’t belong on our head.  Incidentally, if you have boys in the house, farting is always funny.  I once asked a friend with a boy going off to college when her son stopped finding farting jokes funny, and she said she would let me know.

I’d like to pretend this approach works every time, and that my house is a picture of perfect harmony, but that would be a lie — and my husband will probably read this blog and call me out.  To me, the best part is letting the parents laugh too, and release the tension of having a three-year-old.  Toddlerhood is the best of times and the worst of times.  Letting kids have an outlet to accept their various constraints helps us to keep things at least more sane.  In raising children, you can see just how many norms you instill are merely a social construction—and every now and then, you might just decide to go with the benign violation, rather than laugh at it.  Because, seriously, it’s pretty ridiculous that you can never have chocolate for dinner.

Singles And Their Pets – Live Show

What Do Joan Rivers and Charles Schulz Have in Common? They Worked Hard and then Hardly Worked.

Contemplating a Change? Start with a Comedian’s One Sheet