Some pretty bright folks have asked the question, what makes things funny? Despite efforts from the likes of Aristotle, Kant, and Freud, there’s been little agreement on the answer. There are hundreds if not thousands of different humor theories, many of which fall into one of three broad categories: superiority theories, relief theories, and incongruity theories.

Superiority theories suggest that we laugh at the misfortune, ignorance, or inferiorities of others. For example, seeing someone suffer from a swift kick to the groin is funny (according to superiority theory) because he is in a great deal of pain and you are not. 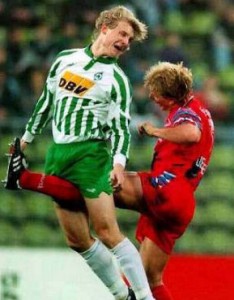 Superiority theory explains why wedgies, insults, and other humiliations can be quite funny provided you’re not the one being laughed at. Jokes often capitalize on the superiority principle. Hearing that some other ethnicity invented a submarine with a screen door or a solar powered flashlight is funny because it allows you to revel in their stupidity. Indeed, it appears that we can learn far more about humor from three stooges (to whom we feel superior) than three wise men (to whom we do not) – gold and frankincense are not nearly as funny as a hearty jab to the eye or a frying pan to the back of the head.

Relief theories suggest that the purpose of laughter is to release excess nervous energy. Relief theory is closely associated Freud’s psychoanalytic theory. According to Freud, the id produces a host of aggressive and sexual impulses that are typically repressed by the superego. Humor occurs when the superego is tricked into expressing the normally forbidden drives. Jokes often rely on clever “jokework” to trick the superego. Consider the following:

One night a policewoman pulls over a drunk driver.

She politely asks him to step out of his car. He willingly does so.

She says, “Anything you say can and will be held against you.”

The cognitive effort required to understand the two possible meanings of “held against you” distracts the superego and allows the reader to bask in the driver’s sexual advance on the unsuspecting policewoman. Relief theories tell us that sometimes a tree is just a tree, but if that tree looks like it has a penis, it can also be quite funny. 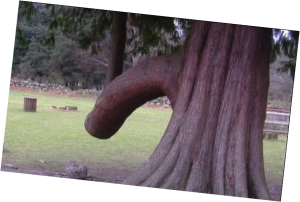 Incongruity theories suggest that something is funny when we perceive some kind of incongruity. Incongruity can refer to things that are unexpected or to things that juxtapose two typically incompatible concepts, like toilet paper and a cheese grater. 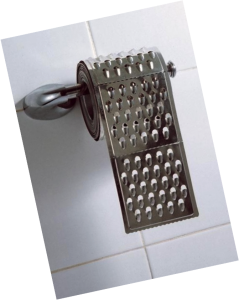 Some believe that incongruity alone is funny. Others suggest that the incongruity needs to be resolved. Consider the following joke:

A secretary goes into her bosses office and  says, “Excuse me, may I use your dictaphone?”

The boss replies, “No, use your finger like everyone else.”

Although the boss’s response seems incongruous, it can be resolved by identifying another possible interpretation of the secretary’s request: instead of asking to use the dictaphone she could have been asking to apply an unconventional body part to different piece of office equipment. Resolution is more apparent in some forms of humor than others. For example, not much is resolved when someone gets kicked in the groin, yet many find the event funny.

Superiority, relief, and incongruity theories provide important insights, but they all fail to provide a complete and convincing answer to what makes things funny. Superiority theory cannot easily explain puns and self-depreciating humor and is inconsistent with the observation that in play fighting victims laugh more than aggressors. Relief theory rests on outdated assumptions about the nervous system and its predictions have received little empirical support. Finally, although most things that are funny seem incongruous, the reverse is not true. Getting a limb caught in a meat grinder would be incongruous, but it would not be funny. (See another post about why humor is not simply incongruity).

(Our lab, HuRL, is investigating an alternative account of humor that suggests humor is elicited by benign violations. Learn about it here.)