Guest post by Caleb Warren: Humor is more (and less) than incongruity

What makes things funny?  Most think that humor has something to do with incongruity. Incongruity can mean that something is unexpected, like a cloud that farts pistachios. One critic of our recent paper argues forcefully that humor results from this type of incongruity:

Another swing-and-a-miss from eggheads trying to explain comedy. Not all comedy stems from either Harm or Social Taboos. If you want your paper to have some validity the next time around, then remember this: the key to comedy is the unexpected.  Full text.

Furthermore, expecting a joke or a gag doesn’t eliminate it’s comedic value. Your favorite joke and comedy film continue to be funny even after you’ve learned what to expect. South Park fans continued to be amused by the same character being killed in nearly every episode for five seasons. If the graph below has any credence, viewers stopped being surprised by Kenny’s death long before they stopped finding it funny. 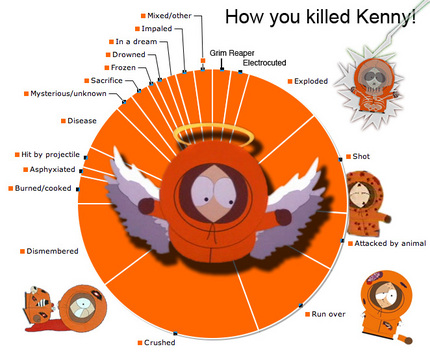 For those remaining unconvinced, I recommend reading up on the following studies both of which suggest that comedy is funnier when it is easier to predict:

Kenny, D. T. (1955). The contingency of humor appreciation on the stimulus-confirmation of joke-ending expectations. Journal of Abnormal & Social Psychology, 51, 644-648.

A number of bright minds contend that humor requires more than mere incongruity or surprise. Some argue that humor occurs when an incongruity is resolved or somehow made sense of. Consider the following cartoon: 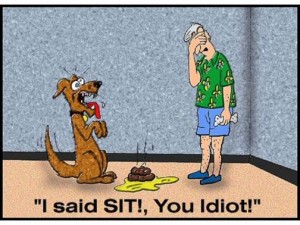 Although the dog’s behavior is incongruous with the command “sit!” it can be resolved by realizing the dog misheard the command. Resolution, although a step in the right direction, does not completely resolve (bad pun intended) the problems with incongruity theory as it has trouble explaining many forms of humor. For example, not much is resolved when someone is tickled, pranked, kicked in the groin, or otherwise pwned, yet many find these events humorous.

Incongruity can also refer to a juxtaposition between two normally disparate concepts, like religion and fetishes (see below). 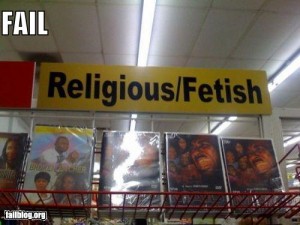 We suspect that this notion of incongruity has some truth to it. As we’ll discuss more when we present the Benign Violation Theory more thoroughly, we agree that humor requires one particular type of incongrous juxtaposition: the perception that something is both a violation and benign. However, not all incongruous juxtapositions are humorous. Some are tragic. Muggers and yacht clubs don’t typically go together, but getting mugged at a yacht club would not be funny. And some are simply awesome. Combining an internet browser and a cell phone brought previously disparate concepts together, but it wasn’t funny; it was profitable and ridiculously popular.

Humor often involves incongruity of one form or another. However, incongruity alone provides a compelling yet incomplete and somewhat misleading explanation of what makes things funny.