A few months ago, I was introduced to comedian Alonzo Bodden during a BBC radio interview. I enjoy Alonzo’s approach to comedy, which is nicely captured in this Tonight Show routine.

Alonzo offered to read and respond to the paper Caleb Warren and I wrote about when people laugh about moral violations. His offer is impressive – my mom doesn’t even read my papers. 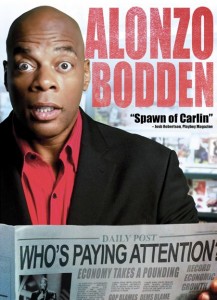 Well, Doc, and I’m assuming you have a doctorate because this study was written by someone much smarter than me. There’s math involved here. We high school grads don’t apply mathematics to joke writing.

I like and agree with the Benign-Violation Hypothesis. It makes sense and I guess its what comics do subconsciously I don’t know if knowing this theory would help a comic write better jokes. Comedy is like playing sports, you just do it rather than analyze it. I don’t think a basketball player figures out the geometry of a jump shot I don’t think many players could spell geometry.

The benign-violation hypothesis suggests that anything that is threatening to one’s sense of how the world “ought to be” will be humorous, as long as the threatening situation also seems benign.

Benign is in the eye of the beholder. Gilbert Gottfried thought his jokes about Japanese earthquake were benign, Aflac did not although I’m sure someone at Aflac found it funny to fire him.

I think its pretty funny the test subjects on page 3 were paid by candy bar, sort of detracts from the highbrow image of a major University. Candy bars should only be used for community college studies. Selling virginity is funny except in LA where they ask, What’s virginity?

A similar idea was initially suggested by Plato (trans. 1975), who believed that humor involves a mixture of pleasure and pain,

Thousands of years later a wise man read Plato and created the Three Stooges then Johhny Knoxille took it a step further and created Jackass. Do they really get hurt filming Jackass? We don’t care. It’s funny.

Study 3, A man rubs his genitals on a kitten? Who writes this stuff? Funny would be the kittens claws come out and man tries to explain at hospital

Or better yet, if you rub your genitals on a kitten and the kittens claws draw blood do you see a doctor or a vet?

BTW,disgusting is often funny. Toilet humor has carried many a young comic.

Mel Brooks focused instead on social distance in his famous quip, “Tragedy is when I cut my finger. Comedy is when you walk into an open sewer and die”

You see, that’s why Mel Brooks is a great writer. I bet you scientists would have stopped at open sewer. Mel knew the funny comes from “and die” There’s always something funnier about taking it to the extreme

For example , if in the case of the man making love to the chicken you had said “his friends found the chicken delicious and asked for his recipe” rather than “he eats it” I believe more test subjects would have found it funny.

When else am I going to use the phrase, in the case of the man making love to the chicken. I love this stuff.

Negative emotions can accompany humor hence the saying, “That is so wrong.”

Tickling is tough for a comic, as we’d have to work the audience one by one and its probably illegal in most states and definitely wrong for college gigs.

That’s your conclusion? That laughter is the best medicine and helps you pick up women? I could have saved you a lot of time on this one, Doc.