Comedian, actor, writer, and producer, Louis C.K, recently performed his stand-up act at the Paramount Theater in Denver, CO. I pulled a few strings and managed to  speak with him before his performance. 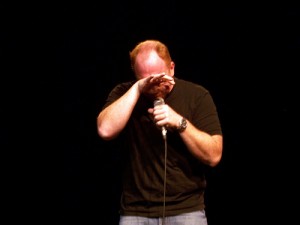 How Louis C.K. felt about my questions.

In previous posts (here and here) I addressed why understanding humor is important. Despite its importance, I find that most people haven’t thought much about what makes things funny. They know who is funny and what is funny — people can answer those questions quickly and easily. Prior to the show, however, I asked several audience members what makes things funny. Generally, they would pause, say, “hmmh,” and venture a guess that was consistent with incongruity theories of humor. Louis C.K.’s initial response was similar: “I don’t know. Um.”  The difference was that, whereas members of the audience were more receptive to my answer that humor is caused by benign violations, Louis C.K. doubted whether the account can explain all humor. Specifically, he suggested that trying to explain humor with one theory is like using one theory to “explain all of human thought.” (One reason that I think most people have not thought about what makes things funny, is that it is not critical to know in order to be funny; see this post.)

If you were to spend eight minutes with a famous comedian would you feel the need to be funny?  I certainly did, and I used precious moments making jokes that he did not think was funny. Ironically, Louis C.K.’s negative reaction to my jokes went against something that he says makes things funny: “Saying things you are not supposed to say.”

Green rooms are not as glamorous as you may suspect – especially when the only person in there is bored and eating a ham sandwich. 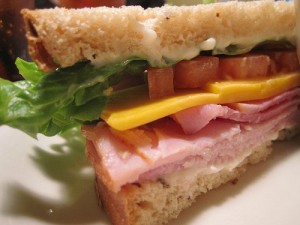 This sandwich looks much better than Louis C.K.’s

I also asked him if he would ask his friend, Chris Rock, for some seed money for the HuRL, the Humor Research Lab. He refused. So if you know a wealthy person who wants to support humor research, please let me know.