Friend, Alf Lamont, took on the topic of Dad Humor in advance of Father’s Day.

My family is a peculiar cycle of funny and unfunny. My dad is an intelligent, accomplished, caring, and otherwise excellent father, but he’s a miserable comic. His jokes have nearly rendered me blind from how far back my eyes roll, and my cheeks sear in white-hot embarrassment when he tires out his “bits” on perfectly decent people who are trying to live their lives without having to decipher whether my dad is making a joke or having a mental collapse of some sort. In complete contrast, my grandfather, who turned 95 last month,is a well-respected columnist with an incredible sense of humor. Grandpa introduced me to Chaplin, Laurel and Hardy, and other classics of comedy when i was a kid, and his sense of humor was the pinnacle of hilarity during my childhood, and continues to crack me up to this day. He only stopped doing “Stroke Jokes” at age 90, after one of his goofball friends suffered a stroke and nobody believed it was real. A nonagenarian “Boy who called ‘Stroke'” cautionary tale, was the only way to get grandpa to stop goofing around with that stuff.

But you know who doesn’t find my grandpa funny at all? Who feels shame and terror every time my grandpa says or does something cheeky, or silly?

Why is Dad Humor so weak? 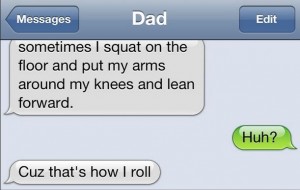 Alf gets into it – but real quick, here are a couple of problems:

-Dads are not cool to their kids because Dads are too busy being Dads. By the transitive property, Dad humor is not good either.

-Dads tell the same jokes over and over. To others, the jokes seem fresh, but not to kids. My quote to that effect:

Unfortunately, you often get the same joke over and over again. “We’re off like a turd of hurdles! Oops! I mean herd of turtles.” How many times do you need to hear that one before you want to slam your head in the car door?

And a different type of Dad Humor, which never gets old. Enjoy:

The Prenup – The Solo Show on Fireside